In the debate about feeding a growing world population and in which livestock industries often see an opportunity to increase the scale or the intensity of their operations, rarely is consideration given to the effect this might have on farm animal welfare.

Livestock farming practices can adversely impact welfare by failing to provide animals with their basic needs. If we are to raise animals for food or fibre, surely we can do so without compromising their welfare?

Regardless of the farming system, at some point animal welfare may be compromised. Poor animal welfare may have several causes, e.g. it may be due to chronic stress as a result of intensive confinement, or it might be acute pain during an invasive procedure. We feed antibiotics prophylactically, we give hormones to make animals grow faster and bigger, we give hormones to induce birth, and we give other additives that promote leanness.

In some industries, whether you are male or female determines whether you live a productive life or are considered a waste product. Breeding for productivity rather than robustness, health and longevity can have poor animal welfare outcomes, as can poor stockmanship and animal handling skills. And what about the suffering of livestock on marginal or drought-stricken lands where feed is minimal at best? 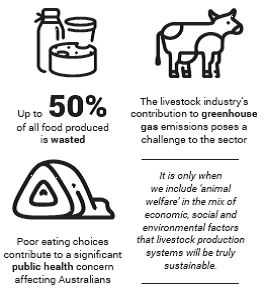 We should work together towards achieving a sustainable livestock production system that sees no party disadvantaged – least of all the animals we farm for food. An alternative supply chain is required. One that: