The RSPCA is opposed to the use of whips for the purpose of enhancing performance in racing due to the pain and distress they inflict on horses. The RSPCA supports the introduction of hands-and-heels racing where whips are carried for safety purposes where proven necessary. 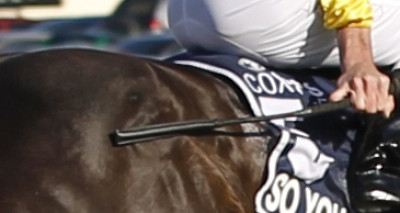 The use of whips in Thoroughbred racing in Australia is governed by Racing Australia’s Rules of Racing. These rules require that a specific type of whip (known as a ‘padded’ whip) is used. The rules set a limit of five whip strikes prior to the final stage of a race, but there is no limit on the number of times a horse can be struck with the whip during the last 100 metres of a race. The rules also allow horses to be slapped down the shoulder with the whip an unlimited number of times, provided the hand remains on the reins.

Research examining the effect of whip use on performance in racing has indicated that horses are whipped most during the last 100 metres of the race, in an attempt to make them run faster towards the finish line. Yet how the horse ran prior to this stage was found to be the most critical factor in racing success [1]. What this indicates is that whip use occurs at its highest frequency when horses are fatigued and have less capacity to respond.

In recent years the racing industry has made a series of changes to the Rules of Racing with regard to whip use. On a positive note, the rules now ensure that both forehand and backhand strikes are now covered by the five-strike limit. However, the rules have been reworded to allow Stewards to exercise more discretion when determining breaches of this limit. The revised rules mean that jockeys who exceed five strikes can avoid being penalised if they do not whip their horse in every stride after the 100 metre mark.

In jumps racing, State racing authorities can now increase the number of whip strikes prior to the 100 metre mark. As a result, Racing Victoria has doubled the permitted whip strikes from 5 to 10.

Analysis of Stewards’ Reports shows that many jockeys still fail to adhere to the rules, particularly the limit of five strikes before the last 100 metres. A 2012 study showed that the whip rules were not being effectively enforced by stewards, and penalties were not acting as a deterrent [2]. A review of Stewards’ Reports in 2013 and 2016 found that the most commonly recorded offences were: (a) failing to adhere to the five-strike rule (44% of whip rule breaches); and (b) raising the arm above shoulder height (24%) [3].

One solution to the difficulty in enforcing whip rules would be to end the use of whips as a performance aid all together, a move supported by the majority of Australians. Independent research indicates that 74% of Australians do not support the use of whips in racing [4]. Furthermore, 87% of those who watch or bet on horse racing, including both regular and casual punters, said they would continue to do so if rules changed to prohibit whipping [4].

Whilst whipping continues, horse welfare could be improved by reviewing annual whip breach rule statistics to identify key areas to improve jockey training, regulation and enforcement. Whip-free (hands and heels) races could also be introduced into the racing calendar as they have in other countries. These measures would help to ensure that racing performance is not determined by inflicting pain through whipping but rather by sound breeding, quality training and outstanding horsemanship.

How you can help

Racing Australia sets the whip rules – if you would like to make your concerns over whip use known, please email racingaustralia@racingaustralia.horse