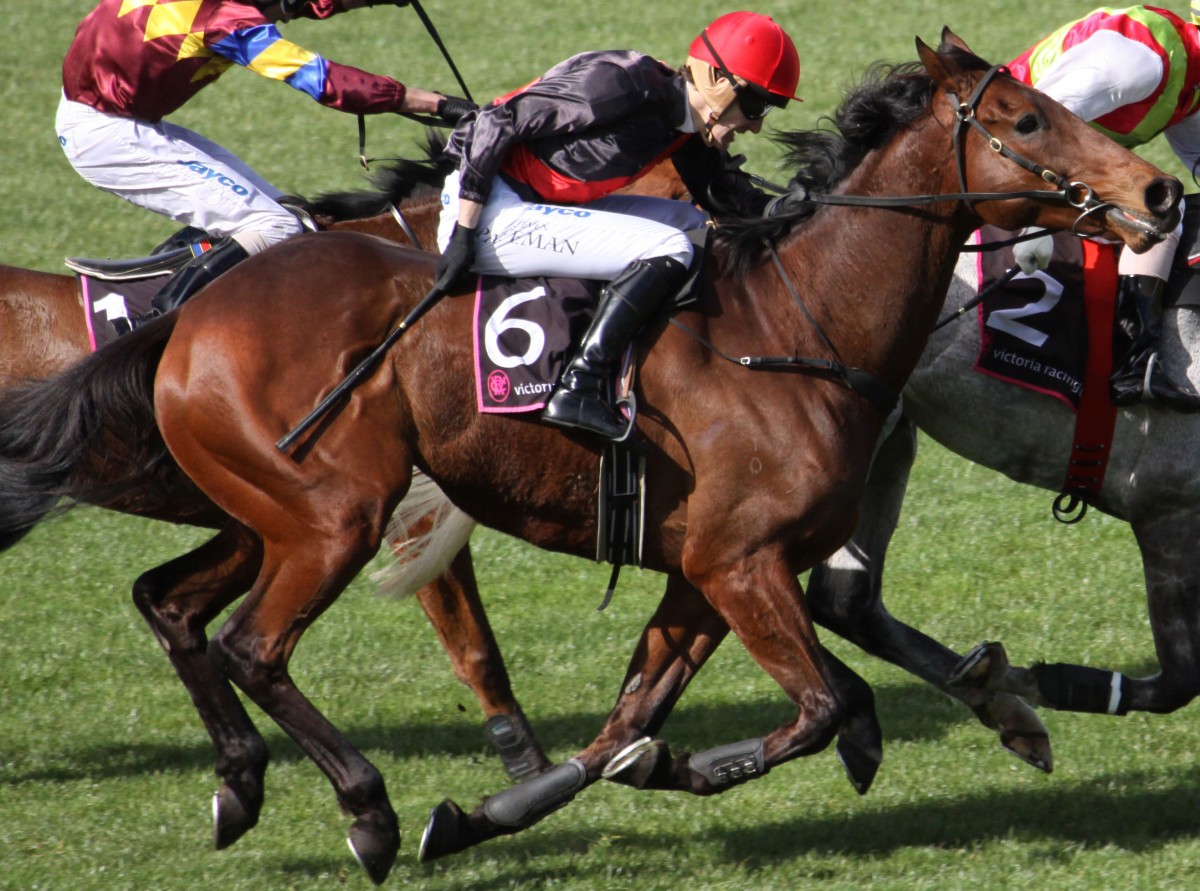 The need and right to whip racehorses merely for sport and wagering is being increasingly questioned by the community due to animal welfare concerns. The industry defends the use of whips as being necessary to enable jockeys to avoid interference or collision and for gaining the best performance from their horse. However, several different studies provide evidence that whipping racehorses for these reasons is not justified.

Are whips needed for performance?

Under current Australian Rules of Racing jockeys can and are expected to ‘ride their horse out’ to ensure maximum performance [1]. Although the whip rules limit the number of strikes prior to the last 100m to five, there is no limit for the remainder of the race but any whipping must not be considered excessive by the stewards and the horse must be in contention to win prize money.

An Australian study showed that horses ran faster when the whip wasn’t used in the 600-400 metre section compared to an increase in whipping, especially by jockeys at the head of the field, in the last 400 metres and in particular the last 200 metres of the race as horses tired [2]. The authors concluded that whipping fatigued horses in the final stages of a race did not affect performance, thereby disputing the claim that it is necessary to gain the best performance from the horse. A recent UK study which compared ‘whipping free’ with ‘whipping permitted’ races showed no significant difference in race finishing times [3]. This contradicts claims that whipping increases the speed of horses or reduces the loss of speed in the finishing stages when horses are fatigued.

The racing industry often cites safety as a reason why jockeys need to use whips, to enable a change to a horse’s direction if they are likely to collide with another horse or trackside objects. The UK study which compared finishing times also found fewer interference reports with ‘whipping free’ races having only 40% of reports compared to ‘whipping permitted races’ with 60% of total reports [3]. Interference is described as the actions of one horse/jockey affecting another on course, which may or may not involve physical contact. This demonstrates that interference was more prevalent where whipping is permitted which is not consistent with claims that whips are needed to reduce interference.

These results are also consistent with findings from an earlier study which analysed races run clockwise with those run counter-clockwise to determine if the whip was predominantly held in the outside hand to counter a horse’s natural tendency to veer away from the bend [4]. The results did not support claims that the whip is used for safety reasons to guide horses to avoid collisions irrespective of the direction of the track. Less than half of the jockeys held the whip in their left hand (outside hand) on a clockwise track whereas over 90% held the whip in the right hand (outside hand) whilst racing on a counter-clockwise track. The authors concluded that the predominant hand used for whipping was based more on the handedness of the jockey rather than the direction of the track given that on average about 86% of people are right handed.

Would betting continue without horses being whipped?

The racing industry also claims that punters believe that whipping is necessary to ensure that horses are ‘ridden out’ to maximise their performance and therefore financial return. However, a survey of over 1500 Australian residents, revealed a different perspective [5]. Of those who watch or bet on horse racing between once a week and once or twice a year, 87% said they would continue to do so if rules did not allow horses to be whipped and 74% believed that whipping should stop. Therefore, the argument that the industry has an obligation to continue to allow whipping to meet the expectations of those gambling on races is unfounded.

There is a mounting body of evidence that the use of whips in horse racing causes suffering to horses, is not justified and is not supported by the community. The RSPCA is opposed to the use of whips for the purpose of enhancing performance in racing due to the pain and distress they inflict on horses.