Since 2009, all jockeys in Thoroughbred racing in Australia have been required to use a whip which is padded at the end, replacing conventional whips which have no padding, This change was introduced in response to concerns raised about the pain caused by the use of whips and the introduction of the padded whip in other countries. New evidence shows that humans and horses have the equivalent basic anatomic structures in the skin that detect pain. Thus, if whip strikes from a padded whip cause pain to humans, then we can assume they also cause pain to horses.

The requirement for jockeys to only use a padded whip does not mean that horses do not feel pain when struck, especially when force is used and horses are hit multiple times. Padded whips cause indentation in the area of impact: the degree of indentation varies with the force of the strike. Under the Australian Rules of Racing, jockeys can strike their horse five times prior to the last 100 metres and from then at their discretion, which could result in horses being struck up to 18 times in a race [1]. 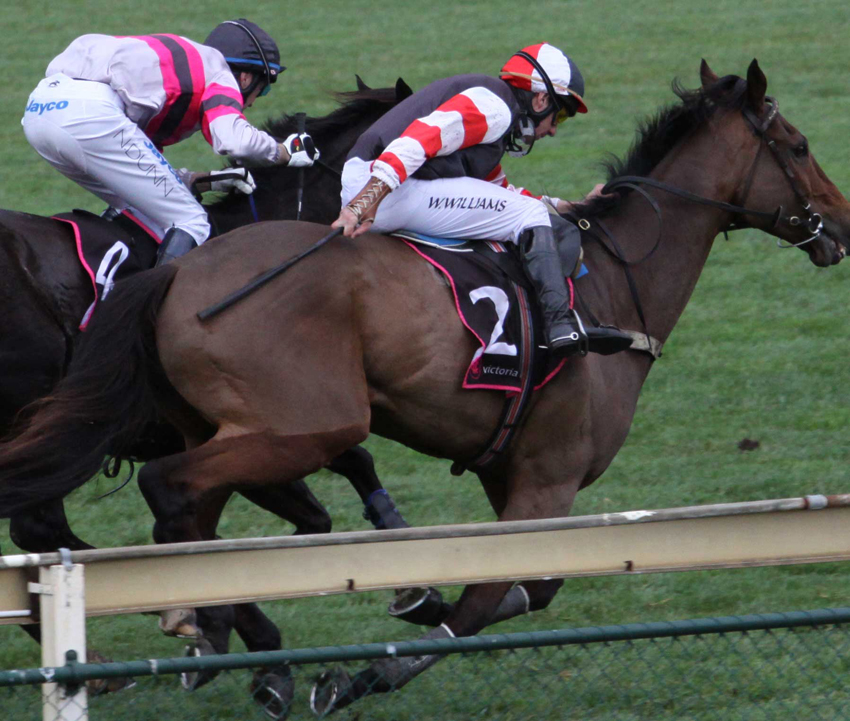 A new landmark study has shown that there is no significant difference between the number of nerves contained within and the thickness of the outer layer of skin (epidermis) between humans and horses [2]. Although the study showed that the next layer of skin (the dermis) was thicker in horses than humans, this layer does not contain nerve endings and so does not contribute to the detection of pain. The results from this research not only refute claims that the skin layer which contains nerve endings is thicker in horses compared to humans but demonstrate that both species have the same density of nerve endings, thereby demonstrating that the skin has a similar structure to detect pain.

Where the unpadded shaft of a padded whip comes into contact with the horse, this section of the whip will cause a similar level of pain as occurs with a conventional whip. One Australian study which analysed video footage of horse races, showed that the whip struck the horse in the abdomen more than 75% of the time and that a visual indentation from the whip was seen in over 80% of strikes [3].

Repeated striking with a whip (of any type) in the same area of the body has the potential to cause localised trauma and tissue damage, the extent of which will increase with the force of the strike and the number of repetitions.

There are therefore three main ways to reduce the pain inflicted by whips: to use a design that has shock-absorbing characteristics; to limit the force applied in striking the horse (through limiting the height and angle of the jockey’s arm); and to limit the number of times a horse can be struck.

Finally, if the intention of using the whip is to signal to the horse to accelerate, then the horse must be given time to respond before the signal is re-applied. Repeated application of the whip when a horse has accelerated will merely confuse the horse or will be interpreted as a signal to decelerate.

The RSPCA advocates for an end of the use of whips as a performance aid in Thoroughbred horse racing.