This article is also available for download as a PDF:
RSPCA Humane killing of crustaceans
[Note: This information is under review.]

Crustaceans show responses consistent with signs of pain and distress. [1-6] They also have the cognitive capacity to remember, and learn to avoid unpleasant stimuli. [7-9] As a result, RSPCA Australia considers that crustaceans should be captured, handled, transported, stored and killed humanely. This applies to all crustaceans, including crayfish, lobsters, crabs, Moreton Bay bugs and yabbies whether the animal is to be eaten raw (sashimi) or cooked.

Killing involves loss of sensibility (ability to feel pain), followed by death. For killing to be humane, either:

Insensibility should persist until death intervenes.

A variety of methods are used to capture, hold, kill and process crustaceans. The methods used depend on the species involved, the scale of the processing operation (commercial or noncommercial) and the end product. In each case, crustaceans should be killed by the most humane method.

The legal status of crustaceans in Australia varies between different states and territories. In New South Wales, Victoria, the Northern Territory and the Australian Capital Territory, crustaceans are protected under the relevant animal welfare legislation (in some states, this only applies to crustaceans intended for human consumption). Penalties may apply if crustaceans are not treated humanely.

RSPCA Australia does not recommend that live crustaceans for human consumption are made available for purchase by the general public. Instead, they should be humanely killed by trained and competent personnel before purchase.

Training should include how to:

Signs of insensibility vary from species to species but generally include: [10]

Signs of stress include:

This advice is based on the available scientific evidence. However, further research is required before definitive conclusions can be drawn about the humaneness of stunning and killing methods for crustaceans.

Crustaceans must not be subjected to mechanical killing without first being rendered insensible using one of the following methods.

With sufficient electrical current, crustaceans can be rendered insensible within 1 second of current being applied – that is, an immediate loss of sensibility. [11]

Only purpose-built electrical stunning equipment (the Crustastun) should be used, in accordance with the manufacturer’s instructions. [10] Failure to adequately electrically stun may have serious welfare consequences, including a high rate of autotomy.

Crustaceans are cold-blooded animals and reportedly enter a state of torpor at air temperatures of 4°C or below. They are rendered insensible when their body temperature is sufficiently reduced by chilling. [3]

Scientific proof of the association between chilling and absence of discomfort, stress or pain is limited. However, this process is commonly considered to be effective, as crustaceans subjected to chilling do not show the behavioural signs of stress that occur when some other killing methods (such as boiling) are used. [12] Further research is needed to fully understand the effects of different chilling methods on crustacean welfare.

One major benefit of chilling is that it reduces mobility. This makes crustaceans easier to handle and humanely kill, and also prevents individuals from injuring each other. [13]

Chilling in an ice slurry

Tropical species of crustaceans and temperate species that are susceptible to cold temperatures may be stunned by chilling in an ice slurry. [14] Insensibility occurs more quickly in an ice slurry than in air at similar temperatures because water absorbs heat much faster than air. [3, 15–16]

A saltwater ice slurry must be used for all marine species. Marine crustaceans should never be placed in a freshwater ice slurry because this is likely to induce osmotic shock.

Freshwater crustaceans should never be placed in a saltwater ice slurry.

Procedure: chilling in an ice slurry

Large crustaceans that are adapted to very cold temperatures may be stunned by chilling in air. Chilling in air takes longer than chilling in an ice slurry because of the slower rate of heat transfer to air than to water. [3, 14, 17]

Once crustaceans are stunned and are showing signs of insensibility, they should be mechanically killed as soon as possible to ensure that they do not recover. [16]

Crustaceans have multiple nerve centres (ganglia). Humane killing requires rapid destruction of all the nerve centres. It is not possible to kill crustaceans quickly by destroying just a single central location (unlike in vertebrates). 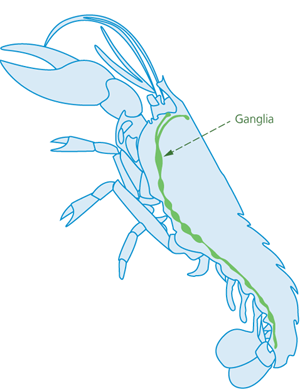 Splitting involves rapidly cutting through the centre-line of the head, thorax (chest) and abdomen with a large, sharp knife. Cutting must occur along the longitudinal midline (lengthways) to destroy all the nerve centres (Figure 2).

Figure 2 View of lobster from above (or below), showing line of cut for lobster splitting 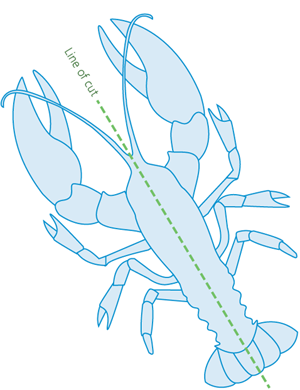 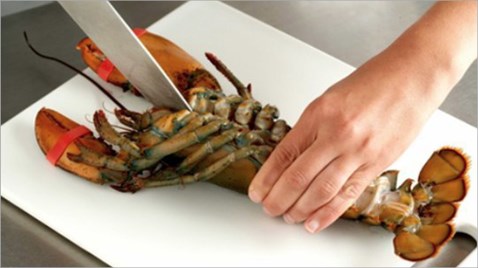 Lie the lobster flat on its back and cut through the midline with a large, sharp knife.
(Image: Scott Phillips Fine Cooking Magazine © 2009 The Taunton Press Inc, www.finecooking.com)

Spiking is suitable for crabs. Crabs have two main nerve centres. One is located at the front of the animal, under a shallow depression. The other lies towards the rear of the animal and may have a small hole positioned over it (Figures 3 and 4). [10, 14] 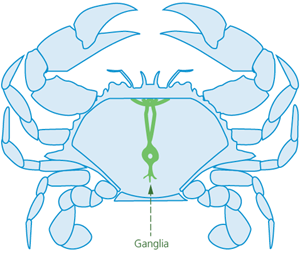 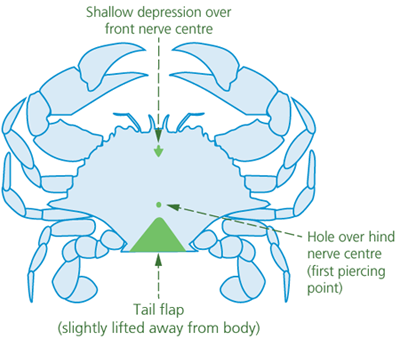 Crabs can be killed by rapid destruction of both nerve centres by piercing both ganglia from the underside of the crab with a pointed spike (e.g. a thick, pointed pithing instrument, an awl or a sharp-pointed knife).

Spiking must not be performed on lobsters because they have a long chain of nerve centres. 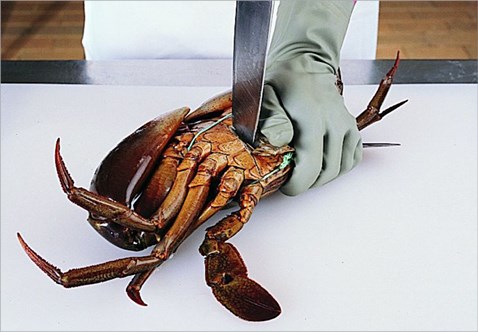 Lie the crab on its back and pierce it with a sharp, pointed object such as a knife.
(Image: www.fishfiles.com.au) 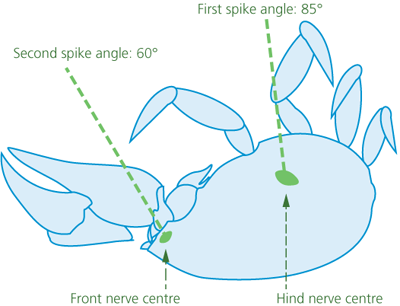 The following methods of processing crustaceans must not be used because they cause an unacceptable degree of pain and suffering to the animal: [10, 14]

[3] European Food Safety Authority (2005). Opinion on the ‘Aspects of the biology and welfare of animals used for experimental and other scientific purposes’. EFSA Journal 292:1-46.

[4] Broom DM (2007). Cognitive ability and sentience: which aquatic animals should be protected? Diseases of Aquatic Organisms 75:99-108.

[9] Magee B & Elwood RW (2012). Shock avoidance by discrimination learning in the shore crab (Carcinus maenas) is consistent with a key criterion for pain. Journal of Experimental Biology 216:353-358.

[12] Yue S (2008). The welfare of crustaceans at slaughter, Humane Society of the United States.