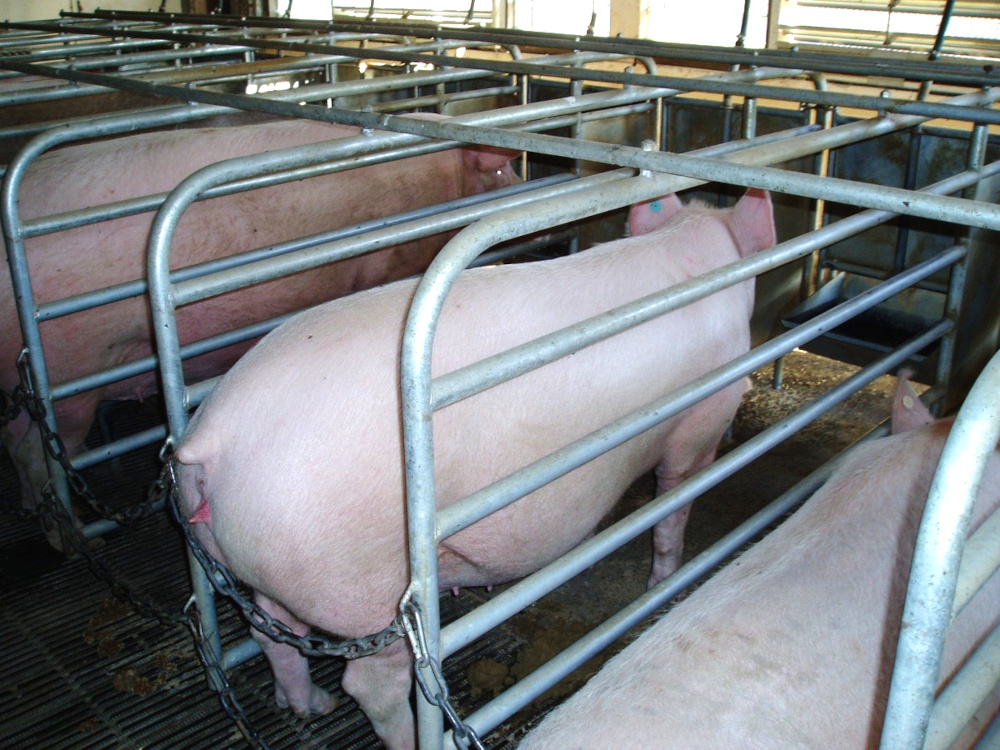 Pigs farmed for meat are the offspring of the breeding animals in a pig herd. These animals include gilts, sows and boars. As part of the pig production process, gilts and sows are mated to produce a litter of piglets. These piglets are raised to a specified weight and then slaughtered to produce pork and pork products for human consumption, including fresh pork, ham, and bacon.

Boars reach puberty at around 5-7 months of age. Gilts are considered sexually mature when they are on heat for two days and their oestrus cycle occurs in regular 21-day intervals. Gilts are usually mated for the first time at 6-8 months of age at their second or third oestrus cycle. Sows are on heat for around three days and are usually mated at their first oestrus, about 4-7 days after her piglets have been weaned. If the gilt/sow is not pregnant, she will return to oestrus about three weeks post mating. Pregnancy lasts for approximately 116 days during which time the gilt/sow will be housed in a sow stall (for a period up to six weeks) and/or housed in groups with other pregnant pigs.

Approximately one week before farrowing (giving birth) the pregnant gilt/sow is moved to farrowing accommodation, usually a farrowing crate, where she remains until her piglets are weaned at 3-5 weeks of age. The breeding cycle then starts again.

Artificial insemination is the most common mating method used, particularly in intensive indoor systems where the gilt/sow is locked in a mating stall for insemination and may remain confined for up to five days after mating before being returned to group housing.

Mating stalls aim to protect gilts/sows from aggressive encounters with other gilts/sows, which may occur when they are mixed into groups after weaning or immediately after insemination. Aggression in recently inseminated gilts/sows induces stress which can affect the hormones secreted at the time that the embryo is attaching to the uterine wall (called ‘implantation’) potentially resulting in pregnancy failure. A key factor to reproductive success is minimising aggression.

Pigs are intelligent and social animals, with a complex range of behaviours and needs. When confined to a stall or crate, a gilt/sow is unable to perform natural and motivated behaviours, such as foraging, or interacting socially with other pigs. As a result, gilts/sows in stalls can show higher incidences of aggressive behaviours and abnormal behaviours, such as stereotypies (e.g., repetitive bar biting). These behaviours are considered to occur when pigs are attempting to cope in an inappropriate environment and are indicative of poor animal welfare outcomes.

The Australian pork industry’s quality assurance program (APIQ) requires that suppliers of a large retailer limit the use of mating stalls to a period up to 24 hours (see APIQ standard p42) suggesting that many pig producers are able to manage artificial insemination of gilts/sows in mating pens, in groups, or with very limited use of mating stalls.

What is the RSPCA’s view?

The RSPCA believes that mating stalls should only be used for the minimum period required to carry out the artificial insemination procedure and that, immediately following mating, gilts/sows should be allowed to return to their group housing. The practice of confining a gilt/sow to a mating stall for up to five days should be phased out.

Where used, the mating stall should have appropriate, non-slip flooring that avoids the risk of foot or leg injury or discomfort. Vertical bars in a mating stall may provide protection from aggression from a neighbouring gilt/sow, however unfamiliar gilts/sows should preferably not be placed next to each other. Aggression resulting from hunger and motivation to forage for food, can be mitigated by increasing dietary fibre. Following mating, gilts/sows should be housed in groups.