As with other rodeo events, the RSPCA is opposed to bull riding because of the potential for significant injury, suffering and stress to the animals involved. Rodeos are held in all Australia states and territories except for the Australian Capital Territory, where they are prohibited.

Based on observed behaviour, the evidence indicates that bull riding is a stressful, frightening experience for the bull: there is no evidence that the bulls ‘enjoy’ the experience.

Bulls, as well as rodeo horses, buck repeatedly as an instinctive reaction to being kicked with spurs and to the tightened flank strap around their sensitive underbelly. Cattle are prey animals and their reaction to being ridden in this way is the same as their reaction to being attacked by a predator, a situation where they experience increased fear, stress and panic. The ‘fight-or-flight’ response is a survival instinct which the animal is unable to consciously control.

It is not uncommon to see bulls attempt to escape the chute as a flight stress-response (see photo 1) or hurl themselves at solid objects to rid themselves of the rider or flank strap. Only when the rider has been thrown or dismounts and the flank strap is loosened do they quieten down. In some instances, bulls are so stressed that they then charge the rider on the ground.

Some bulls also show excessive salivation or drooling, where their saliva is thicker and contains more mucous than normal (see photo 2), indicative of the animal experiencing fear or stress.

A study of bull behaviour at rodeos determined that nearly one third of animals assessed showed signs of distress leading up to the start of bull-riding events and that those who did not react may have either become habituated to the aversive situation or have given up thereby being forced to endure the negative experience [1].

Bulls are at risk of injury whilst in the chute, when released, during and after bucking. Injuries include cuts, abrasions, bruising, muscle strains and bone fractures. In December 2017, a bull suffered a broken leg and had to be euthanased during an event in Adelaide. In early 2018, two bulls were euthanased at a Queensland hotel rodeo event due to leg fractures suffered upon release from the chute and another bull was euthanased due to a leg fracture at a rodeo school in Rockhampton. Furthermore, at some venues, bulls are also subjected to very loud noises and pyrotechnics amid clapping and cheering which can all contribute to increased fear. There is no independent collation and review of injury records (including rodeo training schools), thereby making it impossible to determine the true nature and prevalence of injuries caused by bull riding. A comparative study has shown that over 70% of bucking bulls showed muscle and bone injuries compared to 46% of bulls not used for bucking in rodeos [2]. Bucking bulls were 13 times more likely to have a spinal disorder than non-bucking bulls and they were more likely to develop horn disorders.

Warning: this footage is graphic and requires parental discretion

The nature of bull riding combined with facility limitations leads to poor emergency responses to serious injuries. In some cases, bulls who have broken their legs have been forced to walk out of the arena rather than be sedated and euthanased quickly in situ to minimise further pain and suffering. At venues where a veterinarian is not legally required to attend, such as in Queensland and New South Wales, in some instances bulls who have broken their legs have been loaded onto a truck and transported elsewhere before being euthanased.

Use of flank straps and spurs

A flank strap is tightened on each bull just prior to release from the chute. It applies pressure to the sensitive underbelly causing discomfort and possibly pain in order to make animals buck more violently. Spurs, which are made of hard metal and attached to the boots, are used by some riders to kick the bull in the flank or belly to make them buck more.

In the USA, a number of jurisdictions have prohibited the use of flank straps and spurs under local ordinances, which has effectively shut down rodeos in those areas, as without this equipment, animals do not buck to the excessive level required for the performance.

In Germany, the Registered Association of Veterinarians for Animal Protection reviewed the impact of flank straps and spurs on animals and concluded that they should be prohibited [3].

Bull riding is not a normal husbandry practice on farms or stations and does not align with good cattle handling skills. The Australian cattle industry strongly promotes low-stress stock handling, where workers are trained to minimise stress and handle animals calmly with minimum noise and movement. Workers on many farms and stations have undertaken such training over the past few decades. Meat and Livestock Australia, the industry research and development organisation, supports low-stress stock handling because it is consistent with good animal welfare, occupational health and safety and productivity.

Research shows that community concerns regarding the use of animals in entertainment is rising [4]. As such, there are greater community expectations on government, businesses and organisations to respond appropriately to public concerns regarding the welfare of animals. In response, key players in the tourism and food retailing industries, including Trip Advisor, Responsible Travel, Association of British Travel Agents (ABTA) and McDonalds have all introduced animal welfare policies to help meet their corporate social responsibility (CSR) goals. Rodeos are often sponsored and supported by local businesses and sometime community groups with some receiving donations collected at the event. However, most businesses and organisations are unaware of the significant animal welfare issues associated with rodeos, although awareness is increasing. Increasingly, companies are withdrawing support for animal events, including rodeos, that provoke community concern, on the basis that they do not align with their brand strategy.

Where rodeos and rodeo schools are permitted to be conducted, the RSPCA advocates the adoption of compulsory and enforced animal welfare standards and a registration and licensing system. Compliance with compulsory standards for the management, housing and transport of rodeo animals must be made a condition of licensing. Attendance by a suitably qualified veterinarian should also be mandatory at all rodeo events to ensure prompt and appropriate veterinary care is provided to animals as required.

In their review of rodeos, the Germany based Registered Association of Veterinarians for Animal Protection recommended that bull riding cease based on animal welfare grounds [3]. In Australia, the RSPCA and many other animal advocacy groups are calling for rodeos including bull riding, to cease due to inherent pain and suffering caused to animals. 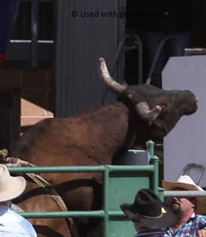 Photo 1: Rearing out of chute likely due to fear and stress. 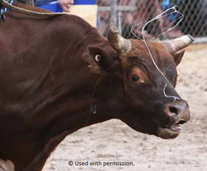 [3] Registered Association of Veterinarians for Animal Protection (2005) Expert opinion regarding rodeo events in the Federal Republic of Germany from a legal, ethological and ethical perspective.