Peri-urban kangaroos are those who inhabit areas directly surrounding established metropolitan, urban, or regional centres. The welfare issues relating to the management of peri-urban kangaroos are complex and challenging, as they involve balancing prevention of harm to kangaroos whilst solving human-animal conflict situations. Studies have shown that significant animal welfare risks can occur, including the death of a high proportion of translocated kangaroos. Unless careful planning is undertaken and key risks are identified and mitigated, translocation should not be considered as an option to remove kangaroos from a particular site.

Why is translocation used?

Populations of peri-urban kangaroos may need to be managed when human development encroaches on existing wild habitats, or when adjacent protected reserves and parklands that are constructed for recreational purposes simultaneously act as safe, stable sources of feed and water for wildlife. Increasing numbers of kangaroos in areas adjacent to residential areas may lead to conflicts including significant animal welfare risks such as vehicle collision, dog attack, starvation and thirst due to lack of food or water. Translocation has been used as a non-lethal alternative to shooting kangaroos. However, there have been instances where a high number of kangaroos have died during the process [1–3]. 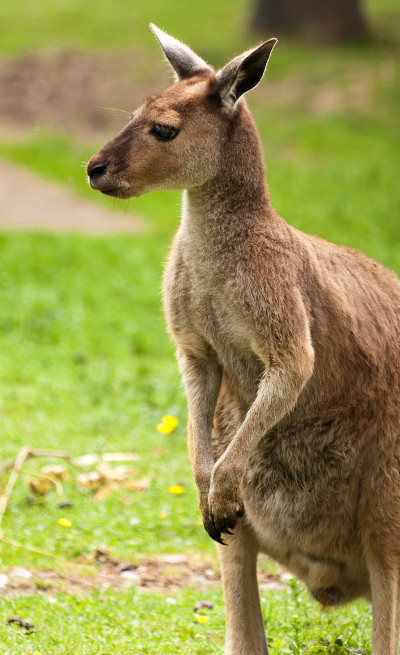 What is involved with translocating kangaroos?

Translocation involves capture, sedation and anaesthesia of animals who are then transported to an alternative location. All steps must be carried out by skilled operators with involvement of an experienced veterinarian being essential. Careful planning is required and selection of an appropriate site to relocate the kangaroos is critical.

Translocating a large number of kangaroos in a short period of time poses significant risks [2, 3]. Successful translocation attempts have occurred where only a small number (approx. 10-20 kangaroos) have been transferred at a time to a sanctuary in the first instance and then, after several months, being transferred to an appropriately selected area of protected natural bushland in close proximity [4]. After full release, monitoring must be undertaken to assist any animals who are unable to cope or who are suffering illness.

What are the risks with translocation?

Several risks are associated with translocating animals including [5]:

Can improvements be made to reduce welfare risks?

When significant numbers of kangaroos occur in an area of proposed urban development, steps must be taken prior to approval of land clearing. Approval should only be granted on the condition that an approved program to ensure the health and welfare of kangaroos is implemented as soon as possible. Fertility control should be considered in the first instance as over several years, this is likely to be effective in reducing kangaroo numbers to a manageable level. There is an urgent need for further research on fertility control and processes implemented to improve accessibility to this management option.

Another option to consider would involve passively moving kangaroos over a period of time, away from areas under development using fencing or other methods. This can be done if suitable habitat exists that is adjacent and contiguous with areas from which kangaroos are being moved. This strategy should account for welfare risks to kangaroos such as from traffic and machinery and suitable and sufficient water and food resources in the area where kangaroos are moving. Other translocation options should only be considered if it can be done over several years and in collaboration with a sanctuary.

Measures identified to help reduce these risks include:

Land development approval processes must include a requirement for developers to provide a risk assessment and management plan for existing native fauna for consideration for approval. This would help ensure that careful planning is undertaken and that measures are implemented at the earliest possible time to avoid suffering of kangaroos affected by future land clearing and development. This requires government and industry collaboration with input and/or involvement of animal welfare/rescue groups, kangaroo biologists/ecologists, veterinarians and the local community.