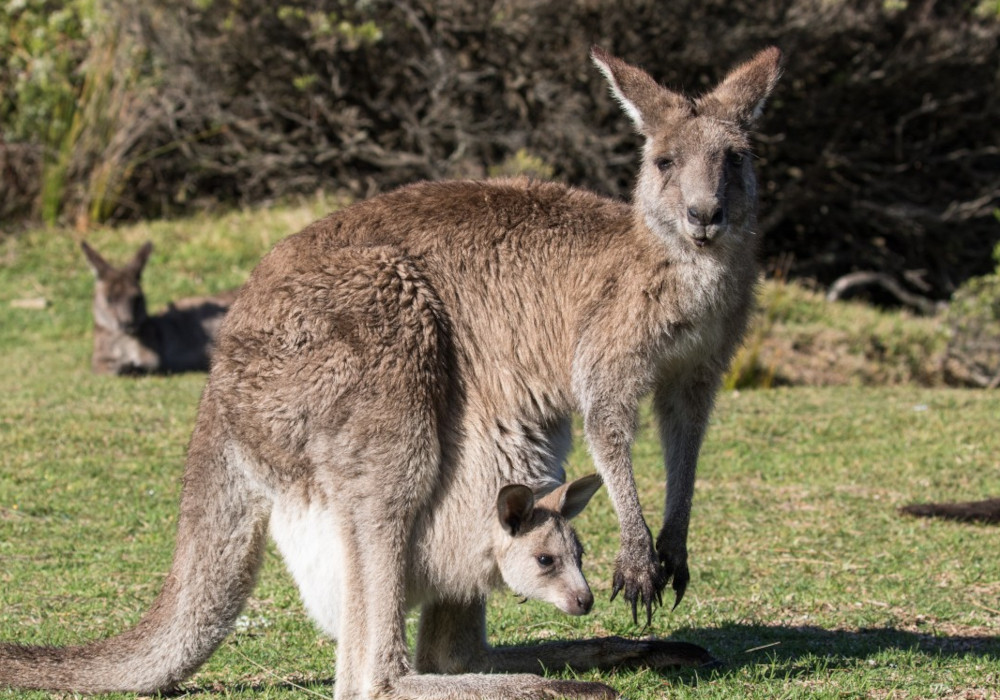 Fertility control is one option for managing kangaroo populations where conflicts may exist with human activity, for example peri-urban areas (areas adjacent to towns and cities). Kangaroos living in proximity to human development are at risk of injury from motor vehicles, negative interactions involving humans and property, and they may compete for food with local native wildlife. Fertility control is a method that doesn’t involve lethal methods (e.g., shooting), however it requires safe and effective protocols and trained individuals to help ensure that it is a humane and effective. Currently, immunocontraception, which is the most promising method, is still being researched but it is hoped that it will become commercially available in the near future.

What is fertility control?

Kangaroos can breed from about 18 months of age with breeding occurring all year round if adequate feed is available, although births occur more commonly in summer. Females can have another joey 9-12 months apart. Fertility control involves stopping or slowing down population growth by directly preventing female kangaroos from becoming pregnant. It offers an alternative, non-lethal solution to population control methods such as culling by shooting.

There are three main methods of achieving fertility control:

Surgical control is permanent, and involves capturing female kangaroos individually, sedating them, then transporting them to a designated site where they can undergo desexing followed by recovery from anaesthesia in a safe environment.

Immunocontraceptives are drugs that are designed to trigger the female kangaroo’s immune response to target hormones required for fertility, which prevents them from becoming pregnant for several years. This differs from chemical control as there is no need for an implant to be surgically placed under the kangaroo’s skin. A single injection, which can either be hand delivered or dart delivered from a distance, has been shown to achieve the same results of fertility control for two to five years [3].

Fertility control methods can continue to be applied to a target population of kangaroos simply by identifying any mothers with pouch young. They can then be retreated without affecting the growth and development of their current young to ensure that they do not reproduce again the following year.

What are the risks with fertility control?

There are inherent risks and complications with any procedures involving sedation, anaesthesia and surgery. Both chemical implants and surgical methods for fertility control require capture of individual animals, and in the case of the chemical method, requires multiple recaptures throughout the animal’s life to sustain the desired effect. During the capture process kangaroos are at risk of becoming stressed and/or injured (mainly due to collision with fences) which can result in death, including animals requiring euthanasia [4]. This risk is increased further where animals are sedated and anaesthetised.

One study has reported that when the hormonal implants lost their effectiveness and were not reapplied, the number of kangaroos increased substantially, which may have been due to non-pregnant females gaining weight [5]. Breeding in kangaroos is strongly influenced by the amount of feed which is available. During drought, females cease breeding but a return to breeding occurs once abundant feed is available – this is known as the ‘boom-bust’ cycle.

The risks associated with capture and sedation can be avoided using the dart method of administering immunocontraceptives to kangaroos. With the use of a skilled operator, kangaroos can be darted at a safe distance with minimal disturbance. Also, there are fewer resources required and the procedure can be done relatively quickly with this method. However, greater force is needed when darting compared to hand injection, which may cause some localised muscle damage at the site of the dart injection. Darting can also be less reliable in delivering an adequate dose to every kangaroo darted. Where numbers are high, several darting sessions may be required and so kangaroos who have been darted must be identified to prevent repeat darting. The darts must also be collected after they fall to the ground, as the needles pose a significant safety risk to humans and animals.

How should fertility control be used?

Using fertility control to reduce conflict between humans and wild animals has many benefits but this method poses limitations and challenges. The following aspects should be considered prior to using any fertility control method [6]:

Future research should be undertaken to monitor the effects of hormone or immunocontraceptives on the long-term behaviour and social interactions of the species. This will also evaluate the effectiveness to identify if the population has been controlled sufficiently and to ensure that inadvertent reduction of kangaroo populations below sustainable levels does not occur.