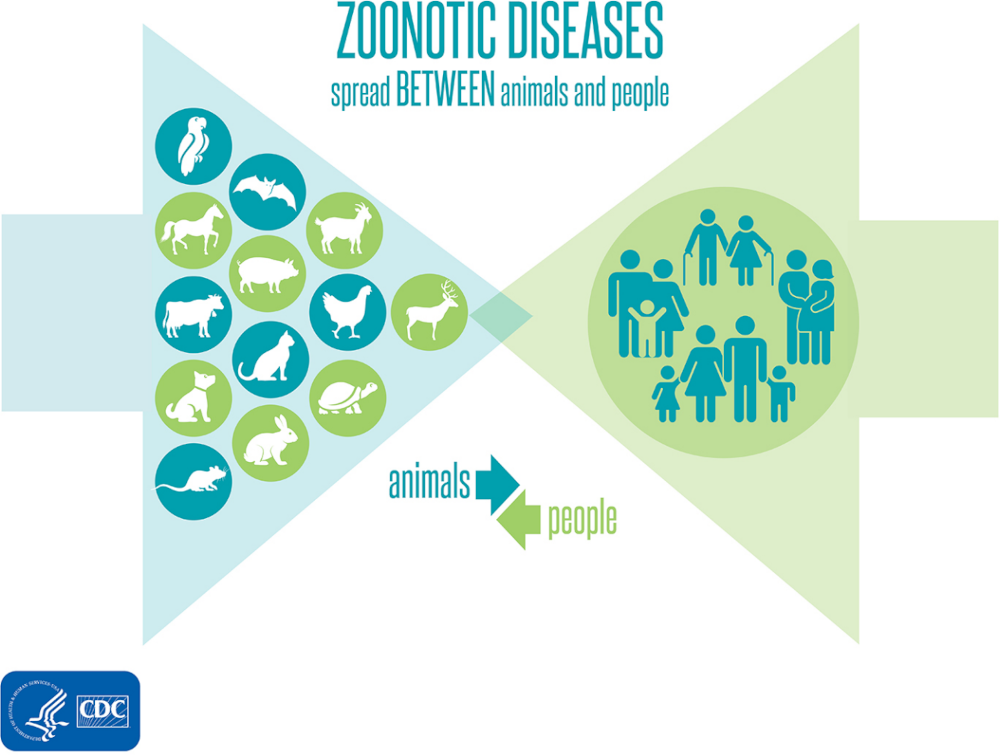 There are specific infections that can be transmitted between animals and humans which may cause disease; these are known as ‘zoonotic diseases’ or zoonoses. Any animal can potentially be involved in transmitting or can potentially be infected by a human with a zoonotic infection, including companion animals, farm animals, and wildlife, as well as species susceptibility to specific diseases varies. Further information on specific zoonotic diseases can be found in the linked articles at the end of this page.

Examples of infections which can be transmitted from animals to humans include Hendra virus and psittacosis.

Examples of infections which can be transmitted from humans to animals (sometimes called ‘reverse zoonoses’) include: tuberculosis, and antibiotic resistant bacterial infections (e.g., methicillin resistant Staphylococcus aureus or MRSA).

SARS-CoV-2 or COVID-19 can be transmitted from humans to animals, however it is thought that animals do not play a significant role in infection of humans. More information on COVID-19 and animals can be found in the linked articles at the end of this page.

Many zoonotic infections can be transmitted both ways (from humans to animals and from animals to humans) including dermatophytosis (commonly known as ringworm).

How are zoonotic diseases transmitted?

Infections that can affect both humans and animals can be transmitted in a number of ways including through:

What increases the risk that a human will be infected by a zoonotic disease?

It is possible for any person to be affected by a zoonotic disease. However, there are certain people who are at greater risk of contracting infectious disease (including zoonotic disease) because their immune system is not functioning normally and is unable to effectively resist or fight infections. People who may not have a normally functioning immune system include young children (under five years of age), older people (over 65 years of age), people on medication that supresses their immune system (for example, chemotherapy drugs or steroids), pregnant women, and people with diseases that can suppress their immune system (for example, cancer or HIV infection).

People at greater risk of contracting infectious disease, or who may have a higher risk of suffering serious illness from zoonotic diseases, should be careful around animals and take the precautions explained below. They should also talk to their doctor about any particular precautions they should take related to their specific condition.

Minimising the risk of disease transmission from animals to humans, and from humans to animals

The risk of contracting a zoonotic disease is low if you are healthy, use common sense and good hygiene, and keep your animals healthy.

The following steps will minimise the risk of a zoonotic disease being transmitted from an animal to a person:

People should also be aware of human infections that can be transmitted to animals. If you know that you have an infection that could be transmitted to an animal, take precautions to reduce the risk of infecting animals with which you come into contact (for example, your pets, wildlife, or farm animals). Specific details should be discussed with your doctor and a veterinarian.

How can human behaviour and climate change alter the risk of zoonoses?

With humans now living in more semi-urban areas and adjacent to native animal habitat in Australia and overseas, there is an increased risk of exposure of humans to disease from animals through increased contact (direct and indirect) between humans and wild animals.

For more information on the longer-term effects of human behaviour and climate change on both humans and our animals, see the links below.