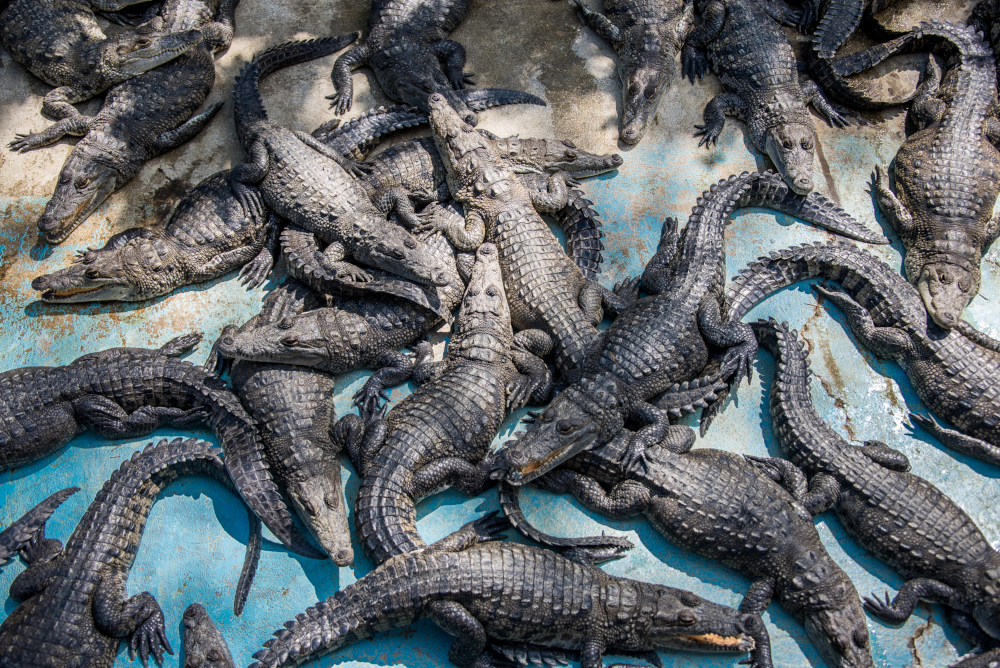 The way in which crocodiles are farmed for skins and meat results in a number of welfare concerns including confinement, which prevents crocodiles from being able to fully exercise freely and satisfy their behavioural, social and physiological needs. Crocodiles are sentient and intelligent animals who need adequate space to exercise and express natural behaviours but these opportunities are denied in a captive farm environment. The RSPCA is opposed to the taking of animals from the wild for the purpose of farming due to the risk of pain, injury or distress, particularly with the capture, handling and long-term confinement of these animals.

Why are crocodiles farmed?

Saltwater crocodiles (Crocodylus porosus) have been commercially farmed in Australia since the 1970s with farms located mainly in the Northern Territory but also Queensland and Western Australia. Once a crocodile reaches the desirable length, they are slaughtered and processed with their skin being used for non-essential luxury items such as handbags, shoes and belts. Crocodile meat is also used in restaurants as well as pet food. Although there are only a relatively small number of crocodile farms in Australia, it has been reported that in the Northern Territory over 135,000 crocodiles are retained on farms [1].

How are crocodiles farmed?

Government approval is currently given to harvest up to 100,000 eggs annually from the wild in the Northern Territory [2], although some farms maintain males and females specifically for breeding. Harvested eggs are placed in an incubator for nearly three months and maintained at incubation temperature above 32°C so that the majority of hatchlings will be males, which grow faster than females. At 9-12 months old when the juveniles reach about 90cm in length, they are moved to outdoor pens where they will remain until they are approximately 2.5 years old (1.5-2m long), at which time they are slaughtered. This involves being immobilised by electrocution, then stunned by a captive bolt to the head, followed by pithing (a metal rod is inserted through the skull and rotated quickly to destroy the brain tissue) to cause death.

Hatchlings are housed in pens with limited space and with many more crocodiles in close proximity compared to the wild. They are also exposed to stress from regular human disturbances. Stocking density in pens affects the amount of space available for individual crocodiles to rest or move, to feed and compete for feed, and to escape pen mates [3]. Aggression amongst penned crocodiles resulting in skin damage and injuries is common especially with higher stocking densities. In addition to pain and injury, young crocodiles may not cope well in confined pens. One study showed that nearly 30% of hatchlings died within 10 months, with the major cause (72% of hatchlings dying) being failure to thrive due to affected animals refusing to eat and starving to death. This syndrome is not commonly seen in wild populations of crocodiles and is thought to be due to an inappropriate captive raising environment [4].

Reptiles have been shown to demonstrate evidence of sentience (ability to experience pain, stress, fear and anxiety); this is an area which should be researched further [5]. Crocodiles have also been observed to engage in play behaviour, suggesting that providing opportunities for play in a captive environment could improve animal welfare, and as evidenced by zoo keepers providing ‘toys’ to captive crocodiles as a form of environmental enrichment [6]. In another study it was reported that when provided with enrichment, captive crocodiles display a wide array of natural behaviours including basking, moving and feeding [7]. Maintaining crocodiles in cramped conditions where they are unable to move freely and without mental stimulation or environmental enrichment is likely to compromise animal welfare.

The minimum voluntary guidelines for the care and management of farmed crocodiles (Code of Practice on the Humane Treatment of Wild and Farmed Australian Crocodiles) published in 2009 is outdated and overdue for review. This code should be updated to help ensure housing and management systems for crocodiles are continuously improving to meet the physical, social and behavioural needs of these animals.

Subjecting wild animals to intensive captive environments for commercial purposes poses many welfare risks including injury, pain, disease and lack of opportunity to exercise and express natural behaviours. The RSPCA does not support the farming of crocodiles due to the inherent animal welfare risks from their physical and behavioural needs not being met.

[5] Lambert H, Carder G, D’Cruze N (2019) Given the cold shoulder: A review of the scientific literature for evidence of reptile sentience. Animals 9, 821.