Brachycephalic Obstructive Airway Syndrome (BOAS) is a breed related disorder that significantly compromises the welfare of affected animals who are unable to breathe normally. Animals affected by brachycephaly (having a flat-face) include dog breeds such as the French Bulldog, Boston Terrier, Pug, Boston Terrier, Boxer, British Bulldog, and Shih-tzu [1] and cats such as the Persian and Persian-derived breeds such as the exotic shorthair. Some rabbit breeds also suffer from brachycephaly, including the Netherland dwarf and the Lionhead breeds.

Many (although not all) brachycephalic animals have Brachycephalic Obstructive Airway Syndrome. BOAS is a lifelong, and often progressive, disorder that affects an animal’s ability to exercise, eat, play, sleep, engage in normal behaviours and live comfortably. Extreme brachycephalic dogs have been shown to have a shorter life span on average compared to dogs with less extreme brachycephaly or non-brachycepahlic dogs [2].

Brachycephalic animals have a shorter and wider skull, and their bottom jaw is disproportionately longer than their upper jaw. The soft tissue structures within the upper airways have not changed structurally with the shortening of the upper jaw and skull, and so are squashed and packed inside the smaller bony structures, creating disruption of airflow [1]. This conformation is a result of breeding to pedigree “breed standards”, where physical traits and general appearance are selected over traits that will maintain and improve the health and welfare of the animal.

Three major airway abnormalities characterise BOAS: narrowed nostrils, long soft palate, small windpipe [3]. If an animal suffers from BOAS, it is likely that they may be suffering from more than one abnormality. Below is a brief explanation of each primary component of BOAS:

Malformation of the cartilage in the nasal airway passage causes the animal’s nostrils to be narrowed and constricted. This results in less air being inhaled or expelled, leading to breathlessness. The nostrils can also collapse when the animal breathes in and extra effort is needed to breathe normally. Please see this article for more information.

The soft palate is a structure located at the back of the roof of the mouth. When it is too long or too thick, it partially covers the opening of the windpipe, reducing the amount of air that can be inhaled causing snorting sounds. It is the most common abnormality in dogs with BOAS and is seen in 85-100% cases [4].

The windpipe (trachea) does not develop properly and so less air enters the lungs which can lead to animals struggling to take in more air with each breath.

BOAS often progressively worsens because if the primary abnormalities of BOAS are not corrected early enough, secondary problems develop. For example, animals affected by BOAS have increased breathing effort and this can cause their airways to collapse, particularly the larynx (the cartilage flaps that sit at the entrance of the windpipe), and this can further obstruct airflow into the lungs. Animals affected by BOAS are often chronically oxygen deficient, collapse and overheat [5]. Other abnormalities may include soft tissue protruding into and obstructing and already narrow windpipe (everted/protruding laryngeal saccules). Animals with BOAs may also develop gastrointestinal problems resulting from their breathing difficulties, which may result in gagging, regurgitation and vomiting associated with BOAS [1, 5].

BOAS impairs your pet’s normal behaviour and their daily activities. If you own a brachycephalic animal, discuss with your veterinarian ways to manage this condition to ensure your pet lives a healthy and comfortable life. Many animals with BOAS, particularly dogs, require surgical correction of their abnormalities and the younger they are treated, the fewer secondary changes will develop (giving a better chance for a good quality of life), and there are fewer complications associated with surgery. It is advised to perform corrective airway surgery between 6 and 12 months of age where possible [7].

There have been a number of tragic fatal incidents when brachycephalic dogs have been transported by air, likely associated with Brachycephalic Obstructive Airway Syndrome (BOAS). This has resulted in many airlines refusing to accept these animals for air transport due to the high risk of serious health problems and even death. 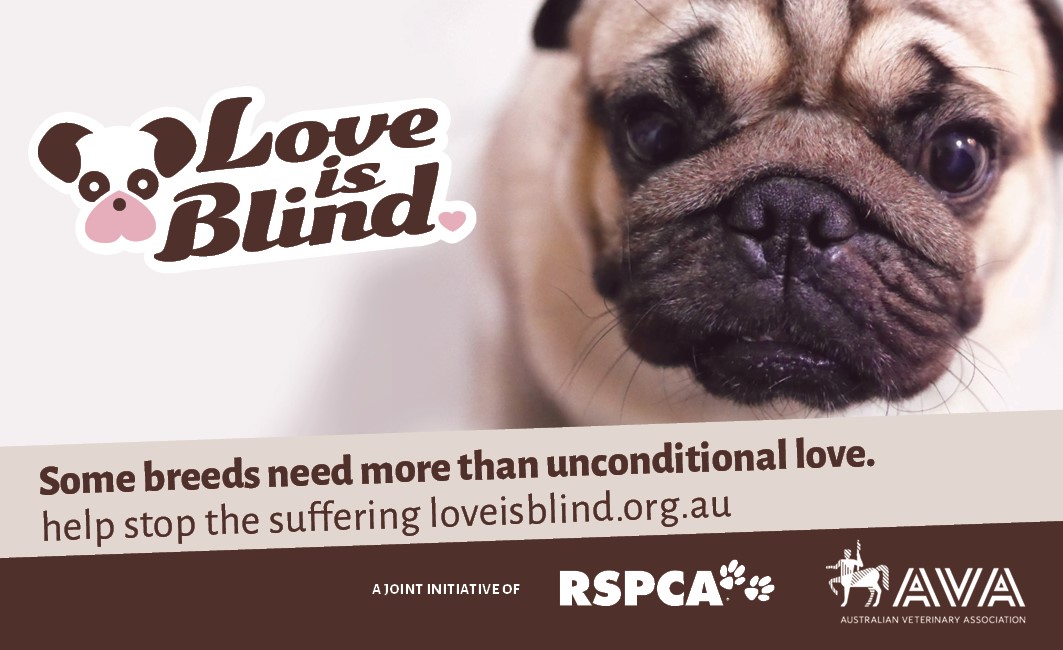 RSPCA Australia and the AVA are raising awareness to try and shift the way purebred dogs are selected and bred in Australia. For more information or to get involved, visit the following websites: Love is Blind and the Australian Veterinary Association. See also: American College of Veterinary Surgeons, International Cat Care, Universities Federation for Animal Welfare and the UPEI Canine Inherited Disorders Database.