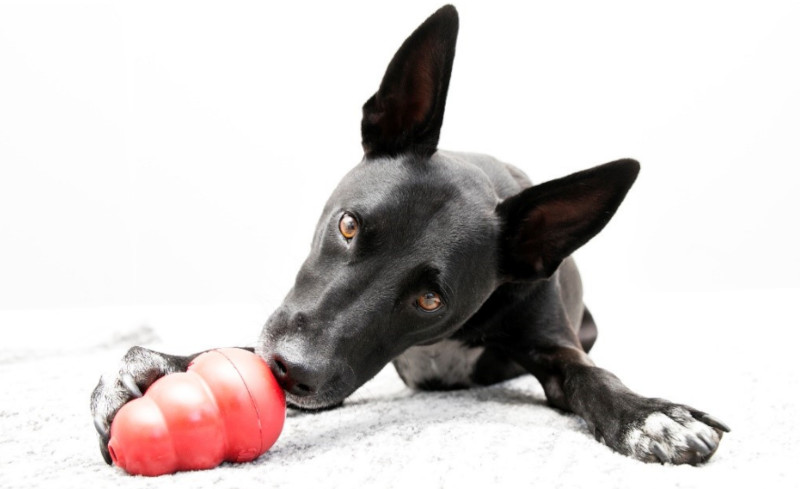 Dogs are highly social animals who generally prefer to live in groups. Many dogs can become anxious when separated from their human family. Anxiety is characterised by signs of distress when affected animals are separated from an owner or family group (or sometimes another animal) to who the animal is attached. Behavioural responses can include toileting in the house, destructiveness, excessive barking, digging or pacing and attempting to escape, among other distress signs.

The goal of management and treatment is to teach the dog how to be calm and relaxed when the person to whom the dog is attached is absent. It involves changes in pet-owner interactions, changes in leaving and returning routines, decreasing the anxiety associated with owner departure, teaching the pet how to be left alone and other environmental changes and management.

Owners should consult with their veterinarian for advice. They can either help you directly or they may offer referral to a behavioural specialist who uses humane reward-based training.

The goal here is to facilitate the dog becoming more independent and less anxious. It involves ignoring attention-seeking behaviour and rewarding the dog for being calm and relaxed.

Changes in leaving and return routines

Decreasing the anxiety associated with departure

This involves changing how the dog perceive pre-departure cues (e.g. picking up car keys) and re-teaching the dog that the ‘routine’ no longer predicts departure. This helps to prevent anxiety escalation and is accomplished through habituation, counter-conditioning and desensitisation which are explained below.

Habituation is a decrease in response as a consequence of repeated exposure to a stimulus. The goal is to disassociate the pre-departure cues from the actual departure. Examples include picking up keys, putting on shoes, packing a briefcase, etc. Using the picking up keys as an example, through habituation, the owner picks up the keys, the dog becomes alert and anxious and comes to the owner; the owner ignores the dog and goes about their routine; the owner does not leave the house. Consequently, the dog learns that picking up the keys does not mean anything. This is done with all of the pre-departure cues so that they no longer predict departure, which no longer leads to an anxious response, and become less important to the dog and easier to ignore.

Counterconditioning means to re-teach the pet to have a pleasant feeling and reaction toward something that they previously feared or disliked. It changes an animal’s anxious reaction to something to a relaxed reaction instead. It’s done by associating the sight or presence of a feared or disliked person, animal, place, object or situation with something good, that the dog likes. Over time, the dog learns that whatever they are anxious about actually predicts good things for them.

For dogs with anxiety when separated from their owner, counterconditioning focuses on developing an association between being alone and good things, like tasty food. To develop this kind of association, every time the owner leaves the house, they can offer their dog a kong type of toy stuffed with food that will take them at least 20 to 30 minutes to consume. As soon as the owner returns home they remove these special toys so that the dog only has access to them and the high-value foods inside when he/she is alone. The dog can be fed all of his/her daily meals in special toys. For example, the dog can be fed his/her breakfast and some tasty treats in a kong type of toy every morning before the owner goes to work. Note that this approach usually only helps in mild cases of anxiety because highly anxious dogs often won’t eat when their owners aren’t home.

Desensitisation means to make the dog less sensitive. Its goal is to eliminate or reduce the exaggerated, emotion-based reaction that an animal has to a specific thing – like other animals, certain people, noises or situations/places. It involves a very gradual process of exposing an animal to a much less intense version of the thing or event he/she fears, in such a way that his fear isn’t triggered. Gradually the intensity of the stimulus is increased, ideally without eliciting the anxious response. In the example of the departing owner, the owner gradually increases the time away.

The dog should be provided with things ‘to do’. Providing lots of physical and mental stimulation is a vital part of managing anxiety. Exercising the dog’s mind and body can greatly enrich their life, decrease anxiety and provide them with plenty of opportunities to engage in normal dog behaviours. Additionally, a physically and mentally tired dog doesn’t have much excess energy to expend when he/she is left alone.

In some cases, separation anxiety can be severe, for example where the dog may be a danger to him or herself (e.g. a dog that causes serious physical injury to him/herself) veterinarians may suggest a combination of pharmaceutical medication and behavioural modification/training to help the dog. Pet owners should discuss this directly with their vet.